Posted By: Consortium Business Solutions on 28th October 2014 under News 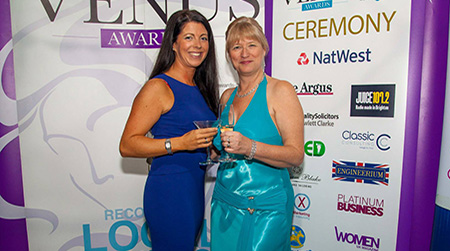 It’s been a busy year on the awards front for Consortium Business Solutions. Since being shortlisted as a finalist at the Sussex Women Awards earlier in the year, our very own Lara Squires (pictured above left, with Spofforths’ Alison Jones) has gone on to be selected as a finalist at the Brighton & Sussex Venus Awards AND the Sussex Business Awards!

Influential Women at the Venus Awards

Lara was up for most ‘Influential Women’ at the Venus awards, which was held earlier this month in Brighton. Unfortunately she didn’t bring home the trophy, but with such strong competition it was an achievement to make it as far as she did. “It was such an honour to be shortlisted, particularly as the calibre of finalists was so high. It was a great evening, and I hope to be back next year!” said Lara.

Boss of the Year at the Sussex Business Awards

We’re now keeping our fingers crossed for December’s Sussex Business Awards, where Lara is nominated for ‘Boss of the Year’! The awards ceremony is going to be held at the Grand in Brighton, so it will provide a great excuse for pre-Christmas celebrations, regardless of the result.